Ukraine's Price For European Choice: A Troubled Relationship With Russia. The Roots And Origins Of Conflict In Ukraine

Ukraine’s price for European choice: a troubled relationship with Russia. The Roots and Origins of Conflict in Ukraine 9 March – talk of representatives of Ukrainian Embassy Liubov Abravitova and Andiy Kuzora “Ukraine’s price for European choice: a troubled relationship with Russia. The Roots and Origins of Conflict in Ukraine” – 86 participants 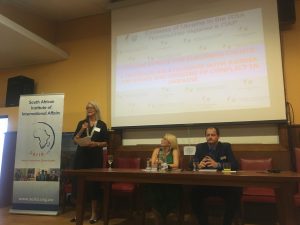 During the last three years, the people of Ukraine have been fighting for their freedom, independence and European path in a war started by Russia-backed terrorists and their proxies.

The Russian annexation of the Crimean Peninsula and military intervention in the East of Ukraine, directly challenge the post-Cold World system.

Ukraine has shown to the world the reports of the pro-Russian thugs shooting women and children, cynically calling it a “protection of the Russian-speaking population.” Russia already even not denies its military involvement and has presented its policies as a reaction to the repression of ethnic Russians and Russian speakers.

This presentation aims to explain the roots and origins of the chain of recent events in Ukraine and its repercussions for the world order and International Law.

During our discussion, we will try to analyze Russian legal and political claims used by Moscow to annex a part of Ukrainian territory as well as to justify its interventions in the East of Ukraine.

We also will examine several explanations of the Russian actions in Ukraine:

We are super excited to invite you to participate

In honor of International Mother Language Day, for